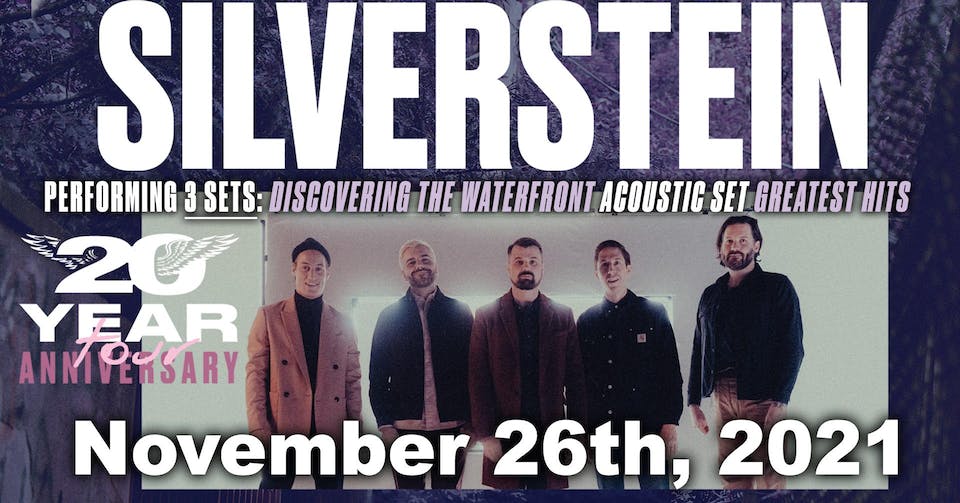 Band will be performing 3 sets on this tour (no intermissions):

“Discovering the Waterfront” album in full

They will be performing as a 6-piece band, joined by Mike Tompa on Strings (Violin & Cello), Keys, and additional accompaniment.

This will be the longest set fans have ever seen (anywhere in the world).

Self-released “REDUX: The First 10 Years” back in April, a collection of 12 newly re-recorded songs from the band’s first decade.

Released new Single, “Burn It Down” in June, featuring Caleb Shomo from Beartooth.

Releasing cover song for “Songs That Saved My Life” compilation on October 8th.

Celebrating 20 Years of Silverstein! Will have new music to share in the new year, album to be released in 2020. New assets coming in January.

Visit the Online Store
Check out our updated hours, and please keep an eye on our upcoming calendar! We understand your concerns about tickets purchased for shows taking place during this time of uncertainty. Many bands/shows are being cancelled or postponed on a case by case basis, and we are actively doing our best to re-schedule as many shows as possible. When a show is confirmed as cancelled or postponed, you will receive email confirmation and an update on your refund. If you have not received specific information regarding an event, please keep your eyes on the event page for all updates. We are working hard with everyone involved to keep the music coming to you! Thank You
+